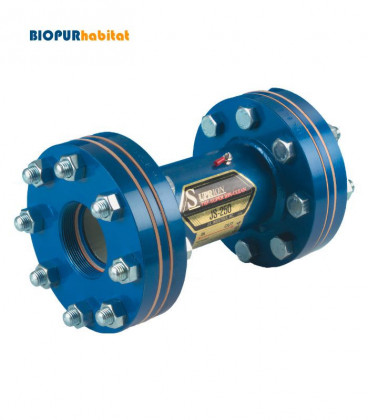 The application of a strong electrostatic field to water is a major evolution in water treatment solutions.

WRAS certification, advised and guaranteed by the National Energy Distributor in the United Kingdom: British Gas

It combines 3 functions in 1, descaling, anti-corrosion and sludge prevention.

Its exclusive process considerably reduces limescale, in addition to its descaling power, the water pipes of the installation will no longer be subject to water corrosion.

The proliferation of bacteria in your water system is stopped, your skin will regain its suppleness and require less hydration, you will feel less itching.

Household appliances will also thank you, because less subjected to limescale it will age much better.

The British gas distribution company the British Gas, has officially validated the efficiency of the process SUPRION.

While this distributor did not have studies carried out by independent design offices that undoubtedly proved the effectiveness of the various systems, British Gas decided to invest a budget of around €2,250,000 to carry out a comparative study over 10 years. Following the conclusions of this study, more than 70,000 households were equipped with

How does it work?

The formation of limestone is mainly due to the calcium and magnesium in water, which are essential to our health. Above all, when possible, they should not be eliminated from your diet. (major disadvantage of common salt softeners)

It is within the Suprion that the physico-chemical action will take place.

By passing through a Teflon chamber and thanks to the carbon electrostatic field amplifier, the water flow will be modified, thus the hard and adherent limestone molecules will be modified into harmless macromolecules called aragonite

The problem with the metal anode?

In the case of an electrolytic system, the magnesium molecules as well as those of calcium will adhere to those of zinc or metal released by the anode. In most existing systems, this phenomenon is accentuated by the creation of turbulence and electrostatic fields using cavitation and Teflon chambers that promote ion exchange.

Thus the limestone film made of these minerals will no longer form inside your pipes, hot water tank, washing machine, coffee machine resistances, etc... but on the metal molecules contained in the water.

Thanks to the system developed by Suprionthe same result is obtained without any elements being released into the water!

We can see a performance and speed of this more curative but also preventive effect. We can talk about prevention because a thin layer of protective limestone will still remain and prevent corrosion and degradation of equipment and pipes

There is also no wear and tear, the manufacture is "clean" and durable.

It is part of a sustainable and environmentally friendly development objective.

This document will inform you about the performance of the product and the correct installation procedures.

10
nicole s.
Water softener
I recommend this product (JS75e22), having noticed the difference in the quality of the water we have "very hard" Thank you!

10
antoine f.
Very good
Excellent product, easy to install, discreet and above all very efficient (JS12E15) We saw the difference in the whole apartment in a few days. The water has become transparent and no more limescale deposits on the shower faucet... Excellent product.