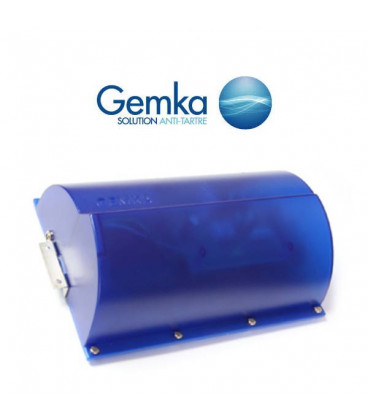 No consumables or maintenance required
Treat your entire water system in a preventive and curative way.

Designed in an environmentally friendly way
Based on an International Patent - innovative rotating induction catalysis technology. 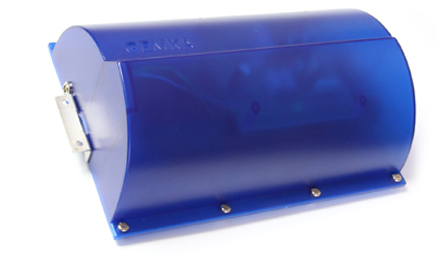 GEMKA is an anti-scaling device developed and manufactured in France by the company R Cube Projet.

WITHOUT CONSUMPTION OR MAINTENANCE, this device allows you to treat your entire water network in a preventive and curative way.

ECOLOGICALLY DESIGNED, it is based on an International Patent and an innovative rotating induction catalysis technology. Its variable frequencies automatically adapt to the hardness of the water to be treated

GEMKA obtained the support and award from Oséo®, winner of the 1997 Lépine International® competition.

How does GEMKA work on limestone?
The GEMKA device forces the crystallization of limestone into a microscopic powder suspended in water. Once it has settled, this limestone can easily be removed from your sanitary facilities and surfaces. Thanks to GEMKA, you can finally control your limescale problems!

Thanks to the suspension of the limestone in powder form, the limestone no longer clings to pipes and heating elements, but also to linen and skin, protecting me against scaling. In a second step, the powder induces a natural erosion phenomenon that dissolves the existing scale, gradually cleaning my installation

As the water passes through the treatment area, moving magnetic fields stimulate the water molecules.
This energy supply corresponding to the vaporization energy is equivalent to "heating the water cold" as the sun does on the sea surface when clouds form.

Being in a closed environment, unlike seawater, the stimulation of water molecules does not cause evaporation but the precipitation of limestone, or flocculation. Indeed, as with a rise in temperature, water molecules increase the amplitude of their vibration, weakening the solvation barriers that kept calcium and carbonate ions away from each other. Since they no longer have any constraints, the latter attract each other and form nanocrystals. This phenomenon then competes with scaling due to friction and the rise in temperature of the heating elements...

THERE IS NO MORE INCRUSTATION, ENTRY IS AVOIDED!

The presence of nanocrystals of limestone suspended in the water in turn causes limestone erosion. As water has become depleted of available calcium and carbonate ions, it begins to behave like rainwater: it seeks to be loaded with mineral salts. And to do this, it begins to dissolve the crystals created by Gemka®, but also the crystals already deposited in the form of tartar in the same way as it does when it gullies down the slopes of mountain ranges. This phenomenon lasts 100 hours (4 days) after its catalysis, the water has time to circulate throughout the network and to be evacuated by the waste water before recovering its scaling capacity.

THANKS TO NATURAL EROSION, SCALING IS ELIMINATED!

9
Dominique F.
There is a comparison
To be seen in the long run but happy for now